With the shrinking of the broadcast TV spectrum in the great DTV transition of 2009 (US) and 2011 (Canada) a few years back, the door was opened for antenna manufacturers to optimize and design antennas for the new range of DTV channels. Antennas Direct was perhaps the most proliferate as it produced its Clearstream antenna line to much success ... and then pushed the envelope further with its newest DBe line, again proving that compact antennas can pack good performance. 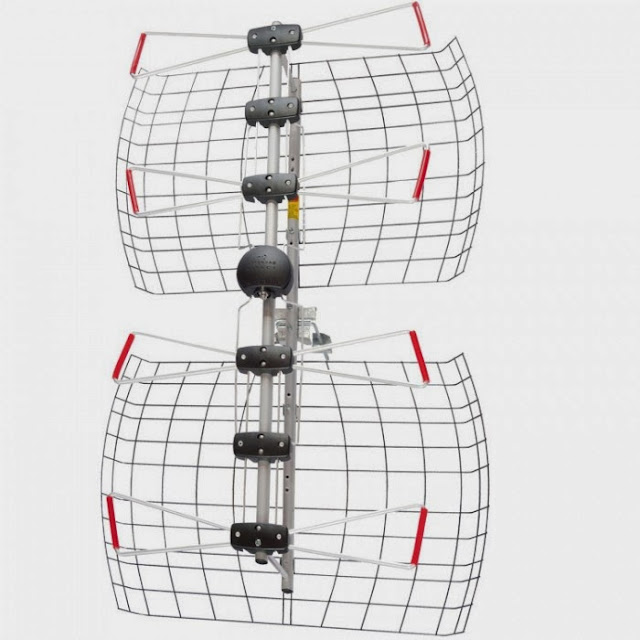 The Antennas Direct DB4e, the newest and most powerful compact UHF antenna on the market (Photo courtesy of Antennas Direct)
To the dismay of some Canadian consumers,  the DBe line was exclusively designed for UHF reception only (channels 14 and up), putting people living in areas with stations still broadcasting on VHF-Hi (channels 7 to 13) on the sidelines. These people would either have to purchase a separate antenna for the VHF channels or forego the DB4e altogether and its awesome UHF reception power in favour a different brand VHF + UHF antenna.


Well, the good news is that this predicament is no longer the case thanks to the creation of the Clearstream VHF kit, a set of antenna dipoles and signal combining hardware that can be used to add VHF-Hi reception on any Clearstream or DBe series antenna. 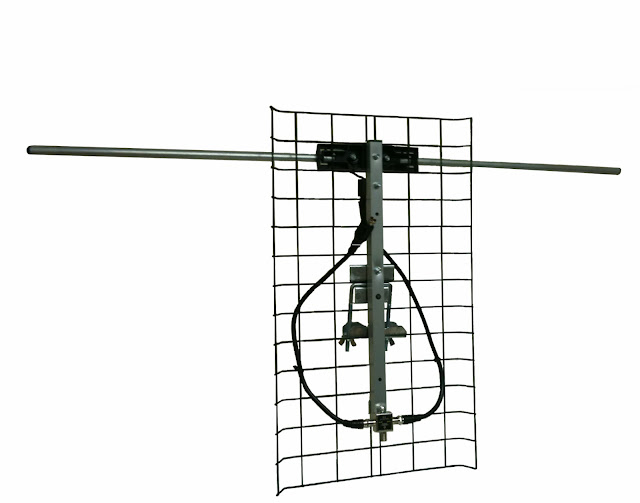 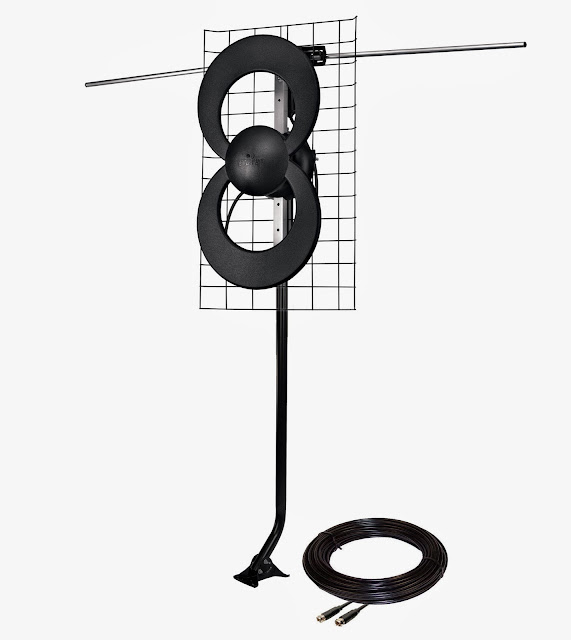 ﻿
The C2V Reflector Kit (top) adds VHF-Hi capability to a Clearstream 2 antenna (above). With some mods, the kit can fit a DB4e. (Photos courtesy of Antennas Direct)

The kit itself comes designed for the Clearstream 2, as it is meant to be form-fit-function replacement of the reflector.  However, with a new set of instructions from Antennas Direct and some basic handyman skills that kit can be modified and adapted to work on the DBe line. 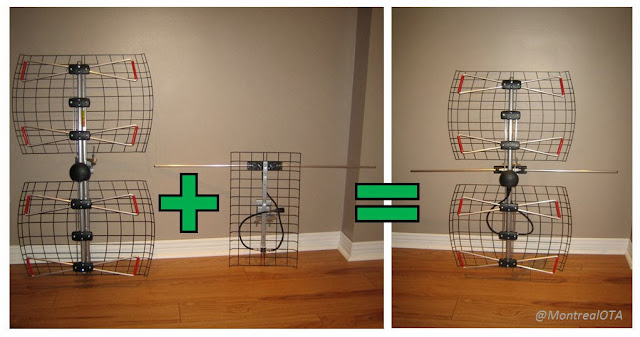 With some handiwork the C2V kit fits on the DB4e. (Photo courtesy of @MontrealOTA on Twitter)


Your very own Average Joe got his hands on the DB4e and the Clearstream kit and decided to test out if this simple kit is enough to redeem the DB4e in VHF zones.

Output: One F-type connector (cable coax) on the antenna for RG-59 or RG-6 cable

Build Quality
Overall, the antenna and dipole kit both have good build quality. We liked that the antenna elements are well put together and the connectors are high quality and protected from the elements. The DB4e mounting clamp is strong and sturdy and the plastic trim pieces are of decent quality. We did notice that some of the metal pieces were a little low end in terms of fabrication tolerances with some holes appearing to be drilled off-centre and some of the reflectors were misaligned (bent). It was nothing major as we simply bent items back to where they should be to get everything nice and lined up. The dipole kit itself is very robust; once deployed from its folded position the clamps hold the dipoles securely with no risk of them collapsing under use. 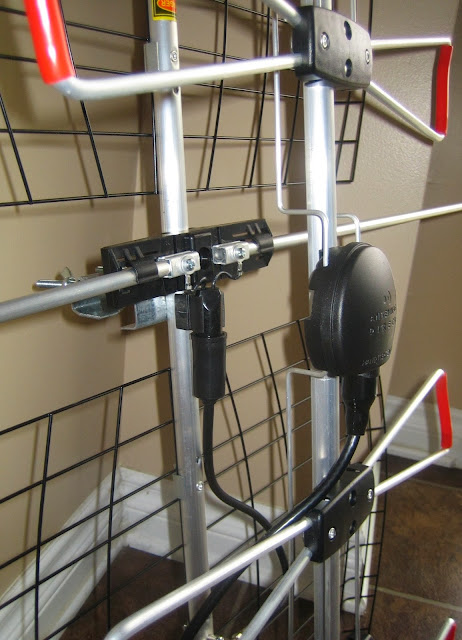 Nice attention to detail: Weather protection is provided on all the cables in the kit and the balun and signal joining components are of high quality. Well done, Antennas Direct.

Assembling the antenna
The DB4e comes almost fully assembled with just the forward antenna element assembly needing to be mounted to the reflector assembly with two spacers. In all, it was an easy setup and took no more than five minutes.

Preparing the dipole kit was a bit more involved as the reflector assembly had to be removed and then hardware had to be swapped in order to install the dipoles on the antenna. As the included instructions were only for mounting on a Clearstream 2, I contacted my local Antennas Direct retailer who then emailed me a PDF of special modification instructions. In the end it took a total of 20 minutes to create what I call the “DB4eV”. 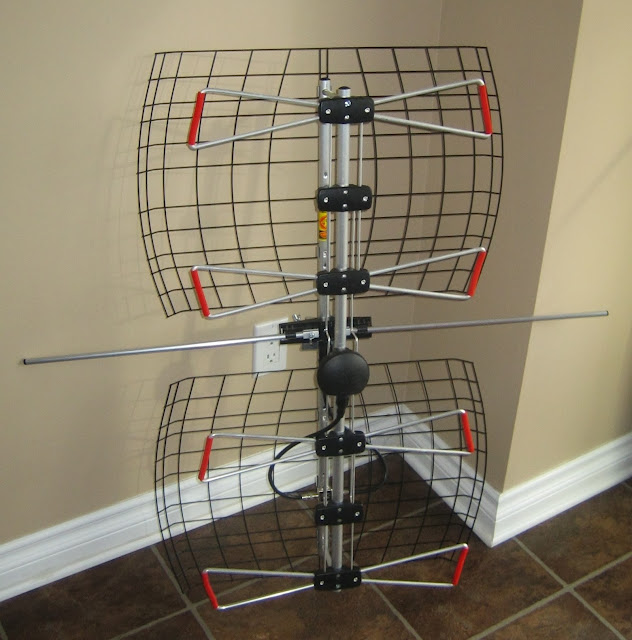 Overall, the assembled antenna and VHF dipole is very robust yet still lightweight.

Installing the antenna was simple. Although on the larger end of the compact antenna category, it is still very lightweight and was easy for one person to carry up the ladder and manipulate. The clamp fits on a large variety of tower poles and can even be installed on J-mounts. While some people have used the DB4e with satellite J-mounts, we suggest going with longer 39” J-mounts over the conventional ones meant for satellite dishes due to the size of the antenna. 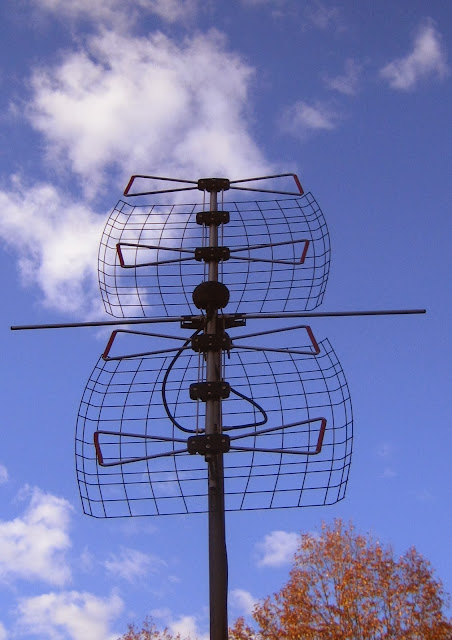 We aired out the DB4eV for testing line-of-sight to our transmitters.


Aiming the antenna is easy as the beam angle is so wide that as long as the front is facing the approximate direction of the broadcast towers you’re bound to get a great signal. We love the fact that the DB4e has wing nuts for the mast clamp as it makes it easy to adjust and aim using just your fingertips, then once you have it pointed in the right place you can tighten it with pliers.
Performance


We tested the DB4e is Montreal for one main reason: this area has a distant Fox station from Burlington that is difficult to catch on RF 43. The DB4e has some of its peak performance in that area so we wanted to see if the DB4e had enough gain to bring in this signal. Until now, we would never even think of recommending this antenna as-is due to the 3 VHF-Hi stations in the Montreal area. With the addition of the diploe kit, here is how the “DB4eV” stacked up. We also included results of a previous brand-name antenna already installed at that same testing location.


The test was conducted by mounting the DB4eV outside and taking five readings at 3-hour intervals during the same day by comparing the UHF and combined outputs of the DB4e. The baseline reading was only taken once as a reference. All signals went through a pre-installed pre-amp of an approximate gain of 12dB and all stations were line-of-sight.

We saw the reception on RF 43 increase as we had hoped to lock in the distant Fox station. What we were surprised to see was that this simple dipole kit also brought in another distant ABC VHF-Hi station from the same area with a fairly strong signal! While we had predicted the two local VHFs to come in easily, seeing this was a pleasant surprise.


While not one of the prettiest antennas out there, it’s definitely not one of the worst we’ve seen. Its ample grills, bright red tips and exposed wiring gets even more bizarre looking once the diploe kit is added on making it a far cry from the sexy Clearstream line we’re used to from Antenna Direct. OK, so is it that bad? No, but don’t expect to use it as the centerpiece of your Thanksgiving dinner.
The antenna will stand out like a glorified BBQ grill when mounted on your house, but the good news is this very compact antenna has enough punch to replace any big rusty behemoth you may already have on the roof. It is also compact enough be tucked away off a chimney or modestly mounted off the eaves in a corner of your house to be somewhat discrete. For apartment dwellers or condo owners, it can also fit hanging off a balcony assuming your building regulation allows it.


Overall, it isn’t that bad looking considering the high quality reception it will give you.


Prices and Where to Buy
In general, the price of the DB4e ranges from $80 to $120 which is a very large range so be sure to shop around.  Unfortunately it is not carried in major retail chain stores, but the good news is there are several online retailers in Canada that sell this item so shipping is reasonable.


The official Canadian distributer for Antennas Direct is online OTA mega-retailer Save And Replay which sells both the DB4e and the VHF Dipole Kit. The dipole kit is a bit hard to find but there are other online sources and some local speciality store will carry it as well. The DB4e is more available and is even carried online by some discount electronics retailers. Earlier this year, Best Buy Canada also had a sale on the DB4e as limited stock item online but does not appear to stock it regularly.


Conclusion
In the end, the VHF kit is enough to redeem the DB4e as a viable open in areas with VHF and UHF signals. We were surprised to see the dipole pick up a US VHF-Hi station more than the rated 60+ miles away in our test.


The good news is Antennas Direct has realized the popularity of this kit and will soon introduce a more universal dipole kit that will be more plug-and-play with the DBe series and not require disassembly of the reflector.
If you’re OK with installing a larger “flat” antenna and need some high-powered hardware, be sure to check out the DB4e with the dipole add-on.