Remember those “free internet” companies in the late 90’s and early 2000s that provided free dial-up internet in exchange for having a cheesy ad banner appear on your computer while you were surfing? Kind of annoying, but nonetheless a small inconvenience for having a free service. Well earlier this week Bell TV went one step further and pulled the same stunt - but this time to their paying customers - by turning a line in their program guide into a rotating billboard for pay-per-view movies. The advertisement remains until it is manually cleared by the user via the remote.

Average Joe completely understands the outrage of Bell TV subscribers to having this annoying feature imposed on them. Could this be yet another reason to turn away from the satellite and cable mega-corporations and switch to the pristine program guides available from free over-the-air digital television? 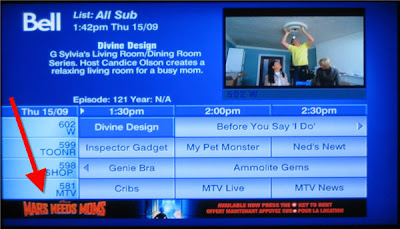 Ask a Bell TV subscriber how they like their new on-screen program guide – they recently lost their last line in the program guide to a rotating banner ad for pay-per-view movies (above). Your Average Joe recommends to consumers to explore the uncluttered program guides offered by Over-The-Air DTV receivers instead which are free from unsolicited software updates to add advertisements from the big telemedia companies (below). 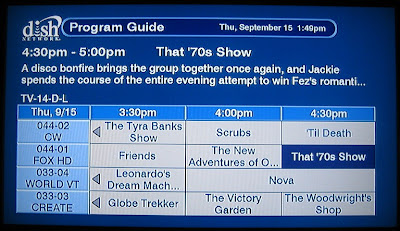 As a paying customer, do you think your provider has the right to flood you with unsolicited advertisements via your on-screen program guide? Send your comments to Average Joe now via my email address in my profile!
Posted by Joe at 2:31 PM
Labels: advertisement, Bell, Bell TV, DTV, EPG, guide, OTA, PPV, program guide, satellite
Newer Post Older Post Home