What’s the Deal With Converter Boxes?

I think the largest amount of questions I’ve received to date were from people scrambling to figure out if they need a converter box and if so, which one to buy. After some extensive testing and research, YOUR Average Joe here to help take the confusion out of conversion.

First and foremost, I hate the name “converter” box. The word converter seems to have caused a lot of mix-ups with most people thinking they simply plug it in between their antenna and analog TV and the digital over-the-air signal magically becomes analog again so that they can use their TV as they did before. WRONG! … and I don’t blame you if you were confused. For me a converter is like those white thingies you bring with you to Europe to plug into the wall so that you can use your hairdryer from home. A DTV converter box works differently.

A better name would be a “DTV receiver”. Fact of the matter is it’s used for OTA DTV in the same way as a satellite or digital cable box would be used, essentially over-riding the tuner on your TV. Your old analog TV does not have the digital tuner needed to decode and display over-the-air DTV signals, hence much like its satellite and cable counterparts the converter box does the receiving/decoding and the TV is used only to display. Because you are controlling the signal through the receiver box now, you can only change channels by using the receiver and not your TV. 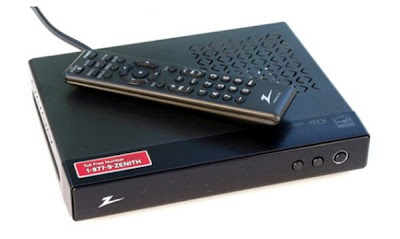 A typical converter box will come with a remote and at least one cable to connect it to your TV.

So despite whatever the chumps at the big box electronics try to tell you about the one model they carry, the average consumer has to be critical about the box they are buying. Don’t just look at picture quality alone because although that is important not all so-called “converter” boxes are created equally. Other factors that can serve as the tiebreaker in making a purchase decision such as the user interface of the receiver, features such as program guides and channel scans, and the size and layout of the remote.

Jeez, good thing your Average Joe is here to help you navigate these waters! Nothing is simple, eh?

So what is an Analog owner to do?

Basically judging from people around me and some of the questions I’ve received I have broken down the remaining cluster of analog TV owners into four categories. 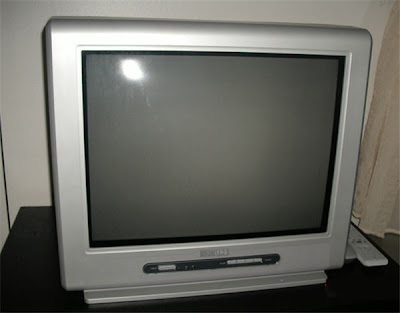 Next stop: a museum?

I’m Anything But Obsolete – your old analog TV is out-dated but it’s not ready for the dumpster yet. It makes no sense to get rid of it but at the same time you can’t justify busting the bank to bring it up to speed. Having a perfectly good antenna-only analog TV is fairly common (even for people that have pay subscriptions) in places like the kitchen, the cottage, break rooms or waiting areas at workplaces and even in bedrooms. Isn’t there a converter box out there that can add many more happy years of life to the TV and not cost an arm and a leg? Average Joe has a suggestion.

Hanging in There – Whether it be your parents or an elderly neighbour, this is the last TV these people will probably own before they start watching their shows at the retirement home. The goal here is to keep the analog TV working in the digital age with a box that will be easy and effective to use. One box out there seems better suited than others.

The Cadillacs – these are the TVs that cost a fortune back in the day and have plenty of good mileage to go on them. You know what I’m talking about – those big screens that are the size of a shelving unit for example. You want a good receiver that will enhance your viewing experience for many years to come. So what’s out there?

The Write-off – You’ve had some good times but it’s time to take ol’fuzzyvision behind the shed out back. So what new TV should you buy? All new TVs have built-in digital tuners but are some better for an OTA DTV setup than others? Average Joe has looked into it and has the answer.

What to do Before Buying

When you head out to the store don’t just believe what the salespeople are telling you about their boxes. Be sure to ask about functionalities and take a good hard look at the remote, this is what you will be using from now on to watch TV! Ask to see display models or open a box. A good store will have demos set up so that you can compare picture quality and play with cool new DTV features such as program guides and signal strength meters.

A very good summary of commercially available boxes is available from Consumer Reports. Feel free to use it to see which features are important for you, and research models of interest on the internet to see what they cost and look like. Don’t be shy to print the table out and bring it shopping with you. 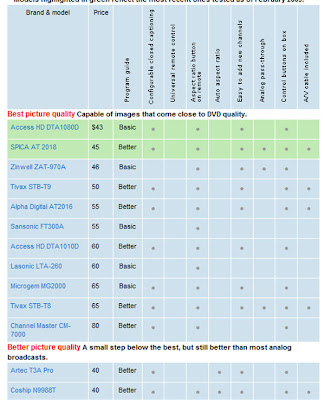 One note: analog pass-through is becoming of less and less importance. Unless a station in your market is not converting to digital, this feature is essentially useless.

Over the next few posts, we’ll look at each of the four scenarios and let you know what Average Joe recommends for the savvy consumer. As each post comes out, I’ll come back here to link it in as well.